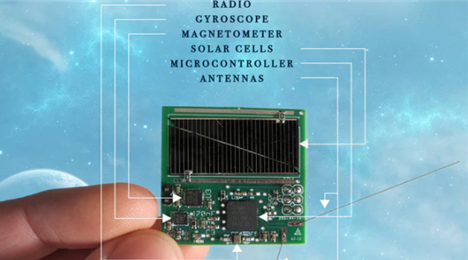 The smallest spacecraft ever launched are successfully travelling in low Earth orbit and communicating with systems on Earth, scientists have announced.

Known as “Sprites”, the miniature satellites are just 3.5cm x 3.5cm and carry radios, sensors and computers, with each device powered by sunlight and weighing just four grams.

While nanosatellites known as CubeSats have previously been sent into space, such systems have a mass thousands of times that of the Sprites, weighing more than 1kg.

Scientists say the latest development is an important a precursor to an ambitious attempt to send space probes to planets beyond our solar system, dubbed Breakthrough Starshot.

“This is a new frontier of tiny, gram-scale spacecraft” said Professor Avi Loeb of Harvard University, chair of the advisory committee for the Breakthrough Starshot Initiative.

The Sprites, Loeb adds, are also cheap. “Each of them is only tens of dollars in cost,” he said.

Announced last year by Stephen Hawking and Russian entrepreneur Yuri Milner, who has put 0m into funding the first five years of the project, Breakthrough Starshot’s goal is to develop chips with a weight of roughly one gram and fit them to a lightweight sail before propelling them through space with a 100-billion watt laser.

While Sprites have previously been carried on board the International Space Station, this is the first demonstration that it is possible to launch such a lightweight miniaturised satellite into space and communicate with it.

The Sprite project is led by Zac Manchester, now a researcher working with Loeb at Harvard University, who began work on the spacecraft almost a decade ago, before the project became part of the Breakthrough Starshot effort.

Two Sprites are currently glued to the outside of the Latvian Venta satellite and the Italian Max Valier satellite, small systems built by the Germany-based company OHB System AG and launched together in June.

“I actually ended up flying to Germany with these things in my carry-on,” said Manchester.

Four Sprites are also travelling inside the Max Valier satellite and are designed to be released into space – although that plan is up in the air given a technical hitch in communication with the Italian satellite.

Michael Garrett, director of Jodrell Bank Centre for Astrophysics, welcomed the success of the Sprites.

“I find it quite surprising but exciting as well,” he said, pointing out that the Sprites show such chips are stable in space, can harness solar energy, and are able to communicate. “Normally this is happening with satellites which are the size of a big mini-van, or even bigger than that,” he added

The Breakthrough Starshot project relies on the miniaturisation of technology, and plans to use a tiny chip to host a number of instruments, including navigation equipment and a camera. However, the communication system on the device will be laser-based, rather than relying on radio-waves as the Sprites do.

“If someone had talked to me two years about sending anything to the nearest star I would have thought that was a bit of a joke to be honest,” said Garrett. “I suppose I had never really grasped the concept that nowadays we can put lots and lots of complexity onto just a computer chip that weighs hardly anything.”

The idea is that by sending such tiny spacecraft to planets orbiting nearby stars, it will be possible to collect data which could help to shed light on the possibility of life beyond Earth.

The top destination for such a mission is our nearest star system, Alpha Centauri, within which is the star Proxima Centauri which is orbited by the planet Proxima b.

Not only is Proxima b thought to be a rocky planet, but it is also within the so-called “habitable zone”, the distance from a star at which liquid water might exist, which has caused much excitement in the search for extraterrestrial life.

Martin Rees, astronomer royal and emeritus professor of cosmology and astrophysics at the University of Cambridge, described the success of the Sprites as a huge development for miniaturised spacecraft.

While Rees believes sending tiny space probes to nearby star systems is “very futuristic”, he says the satellites could open the door to new miniature devices to probe our own planet – and the solar system.

“You [could] have very large numbers of tiny probes monitoring Saturn and its moon etc in more detail than we have done up till now, simply because of the advances we are familiar with every day from mobile phones,” he said, pointing out that the technology on board the Cassini spacecraft currently studying the planet is decades old.

Loeb believes it will take 20 years for the Breakthrough Starshot space probes to be developed, and another 20 for them to reach the Alpha Centauri system, but he says the wait will be worth it.

“You can think of it as the modern incarnation of building the pyramids,” he said. “My personal hope is that once we have a spacecraft leaving the solar system we get a message back saying ‘welcome to the interstellar club’.”