Enjoy the blood moon while you can. Donald Trump has plans for it 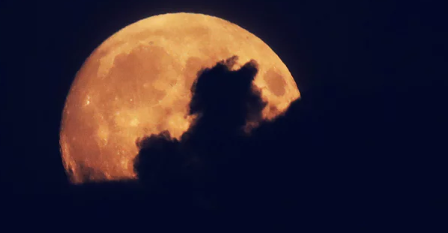 This article titled “Enjoy the blood moon while you can. Donald Trump has plans for it” was written by Philip Ball, for The Guardian on Friday 27th July 2018 10.55 UTC

There’s plenty that’s atavistic in the buzz about tonight’s lunar eclipse, which will turn the moon blood-red. It’s not just about the apocalyptic associations of this astronomical phenomenon itself, mentioned in the Book of Revelation (6:12, if you’re curious). The whole business of moon-gazing is an ancient impulse, its effects more culturally transformative than we might realise.

The moon landings, which have their 50th anniversary next year, were the culmination of a narrative that began when Galileo trained his telescope on the moon in the early 17th century. Discerning shadows along the boundary between bright and dark, he concluded that the moon had mountains – quite unlike the smooth sphere of Aristotle’s cosmos. It was a world like our own, to which the astronomer Giovanni Riccioli added “seas” in 1651. (Apollo 11 landed in one, the Sea of Tranquillity.)

Related: Lunar eclipse 2018: when to see the blood moon – and the science behind it

When Galileo announced his discovery in The Starry Messenger in 1610, poets as well as philosophers were entranced. John Milton, who is thought to have visited Galileo when he was under house arrest in Arcetri and looked through his telescopes, evoked the vast expanses of space that the Italian opened up in Paradise Lost. But in that age of exploration, others immediately thought of the “new world in the moon” as a place to journey to – and colonise. Galileo was compared to Columbus, and the vision of space travel that took off in the 17th century was built explicitly on the new genre of travel writing, and had the same eye on profiteering that took Columbus to the Americas.

Ah yes, them. “Space is the ‘next great American frontier’ – and it is our duty – and our destiny – to settle that frontier with American leadership, courage, and values,” announced vice -president Mike Pence last December on the signing of President Trump’s Space Policy Directive 1, which reorients Nasa’s priorities towards returning humans to the moon – where no person has been since the Apollo 17 mission of 1972. The wording of the directive would not have looked out of place, mutatis mutandis, in the agreement signed in 1492 between Columbus and his Spanish sponsors Ferdinand and Isabella: it instructs Nasa to “lead an innovative and sustainable program of exploration with commercial and international partners to enable human expansion across the solar system and to bring back to Earth new knowledge and opportunities”.

The acting Nasa administrator at the time, Robert Lightfoot, insisted that “Nasa looks forward to supporting the president’s directive strategically aligning our work to return humans to the moon”. And the policy will face no resistance from the current administrator, Jim Bridenstine, a Republican Trump ally with no background in space science, who is enthusiastic about commercial exploitation of lunar resources. But this determination to assert American values on the moon – as Trump put it, “This time, we will not only plant our flag and leave our footprints … we will establish a foundation for an eventual mission to Mars” – has naturally led to concerns that it will sap funding for real space science from elsewhere in Nasa.

Perhaps those concerns are best directed towards Nasa’s climate monitoring programs, rather than its objectives on other worlds. Bridenstine has in the past questioned the idea of human-induced climate change, and there is talk of Nasa employees being discouraged from talking of global warming. Plans to axe Nasa’s participation in a scheme for monitoring carbon dioxide emissions by satellite have already been announced.

Related: Lunacy? Far from it – you really could live on the moon | Chris Hadfield

But it’s hard to see how an expensive obsession with going to the moon won’t also affect unmanned space missions too. Following in the glorious footsteps of the Voyager missions of the 1970s, Nasa has provided many of the most inspiring – and scientifically rewarding – journeys into the cosmos, from the sojourns of the plucky Mars landers Curiosity and Opportunity to the New Horizons probe that revealed the frozen-nitrogen mountains and methane-ice dunes of Pluto. Quite aside from the riches that these missions have conferred on planetary science, they are every bit as sublime and uplifting as the Apollo 11 landings.

In contrast, the scientific case for a return to the moon is equivocal. Sure, there are some things humans might do there that robotic landers can’t – but artificial intelligence and robotics are capable of rather more now than they were when the Beatles released Abbey Road. Advocates of human exploration of the moon have yet to make a scientific case that would justify the tremendous cost and risk it would incur.

More often now – as Trump’s directive implies – the argument is couched in terms of material benefits. Take with a liberal pinch of salt the claim that we will bring back vast quantities of helium-3 as a fuel for nuclear fusion. The real issue is that this entire notion of space prospecting is in a febrile place. It was partly the looming inevitability of a lunar landing that prompted the 1967 Outer Space Treaty, which stipulated that “the exploration and use of outer space shall be carried out for the benefit and in the interests of all countries” and that space “is not subject to national appropriation by claim of sovereignty”. The US began tearing up that idea under the Obama administration in 2015 by allowing firms property rights to resources mined from space.

So enjoy the blood moon while you can. At this rate, we might one day find ourselves gazing up at land owned by Elon Musk or Facebook.

• Philip Ball is a science writer