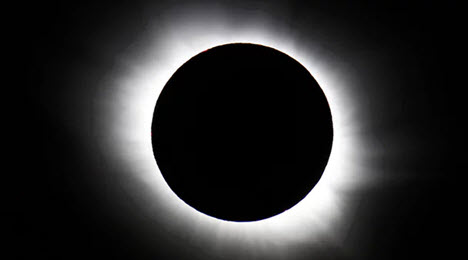 This article titled “The great American total solar eclipse” was written by Alan Pickup, for The Guardian on Sunday 9th July 2017 20.30 UTC

If we have not made plans for the total eclipse of the Sun that crosses the USA on 21 August, our options are dwindling fast. Many rooms and campsites along the path of totality are already booked and it is only within that path, no more than 115km wide, that the full spectacle of totality is experienced.

After touching down in the NE Pacific, the centre of the Moon’s shadow makes landfall in Oregon at 10:17 PDT (18:17 BST) and speeds across the country to leave the coast of South Carolina at 14:48 EDT (19:48 BST). Totality ends SW of Cape Verde in the E Atlantic.

As it traverses the state line between Missouri and Kentucky, totality lasts for a maximum of 2 minutes 40 seconds, but the weather prospects may well influence our choice of vantage point.

Anyone outside the path, and that includes the rest of N America, the northern part of S America and parts of W Europe and Africa, must be content with a partial solar eclipse. Britain sees only a brief and shallow partial eclipse as the Moon clips the bottom edge of the Sun just prior to sunset.

Along the path, the Moon’s disc is just wide enough to hide the Sun’s dazzling surface, its photosphere, and allow views of its pearly corona, the incredibly hot plasma that surrounds the Sun, and of prominences, fiery loops or towering flame-like projections of cooler plasma at the Sun’s edge.

When sunspots are plentiful, and the solar magnetic field disrupted, the corona is distributed roughly symmetrically around the Sun. With few sunspots at present, though, we might expect the corona’s shape to be more influenced by the Sun’s bulk N-S magnetic field, so that it extends further above the Sun’s equator than it does over the poles.

Only during those precious seconds of totality can we study the Sun directly without extreme caution. At all other times, we must resort to those ubiquitous “eclipse glasses” or project the Sun through a pinhole, a small telescope or one half of a pair of binoculars. It is also possible to buy certified solar filters to install in front of our telescopes or binoculars. Just be certain that any glasses or filters are secure and unblemished to avoid viewing the Sun directly, which would invite serious eye damage.