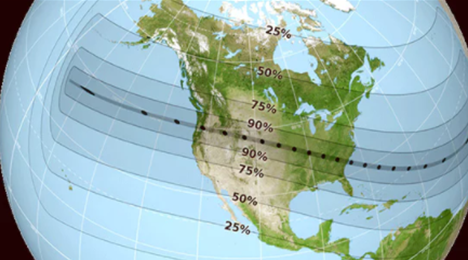 This article titled “Great solar eclipse countdown under way” was written by Alan Pickup, for The Guardian on Sunday 13th August 2017 20.30 UTC

The countdown to the Great American Eclipse on 21 August is entering its final week as eclipse-watchers are completing their plans for the first total solar eclipse to cross the USA from coast to coast since 1918.

Millions live in the path of totality, the corridor up to 115km wide that visits 14 states from Oregon to South Carolina. Millions more will converge on it so that highways may be gridlocked and hopes of chasing clear weather may be curtailed. Even for those under clear skies, though, one has to wonder just how many will enjoy the full eclipse experience.

Related: What you need to see the total solar eclipse across America

As I mentioned last month, it is only during totality that the Sun’s awe-inspiring corona and prominences might be glimpsed. And it is only during that brief window, no more than 2 minutes and 40 seconds long, that we may look at the Sun directly without serious damage to our eyes.

I have no doubt that some misguided souls will waste their few seconds of totality by fiddling with their phones and cameras as they struggle to take photos or even selfies while the resulting fusillade of camera flashes annoys those around them.

The eclipse experience includes the gradual partial eclipse phase, as the Moon’s disc takes more than an hour to encroach on the Sun. By the time 90% of the Sun is hidden, even for areas adjacent to the eclipse path, we can expect temperatures to drop, the daylight to take on an eerie hue and, possibly, wildlife to behave unusually.

For the few seconds just prior to totality, the final sliver of the Sun’s surface may break up into a “string of pearls”, also known as Bailey’s beads, as sunlight glints through valleys at the Moon’s edge. The diamond ring effect is seen as the last bead fades and it is only after that is extinguished that it is safe to observe the Sun directly. Until, that is, a new diamond sparkles at the opposing solar limb and the sequence reverses as the Sun is uncovered.

During totality, it should be easy to spot the brilliant planet Venus 34° W of the Sun and Jupiter some 50° to the Sun’s ESE, while the first magnitude star Regulus in Leo will be much harder to glimpse through the corona just 1.0° to the E (left) of the solar limb.