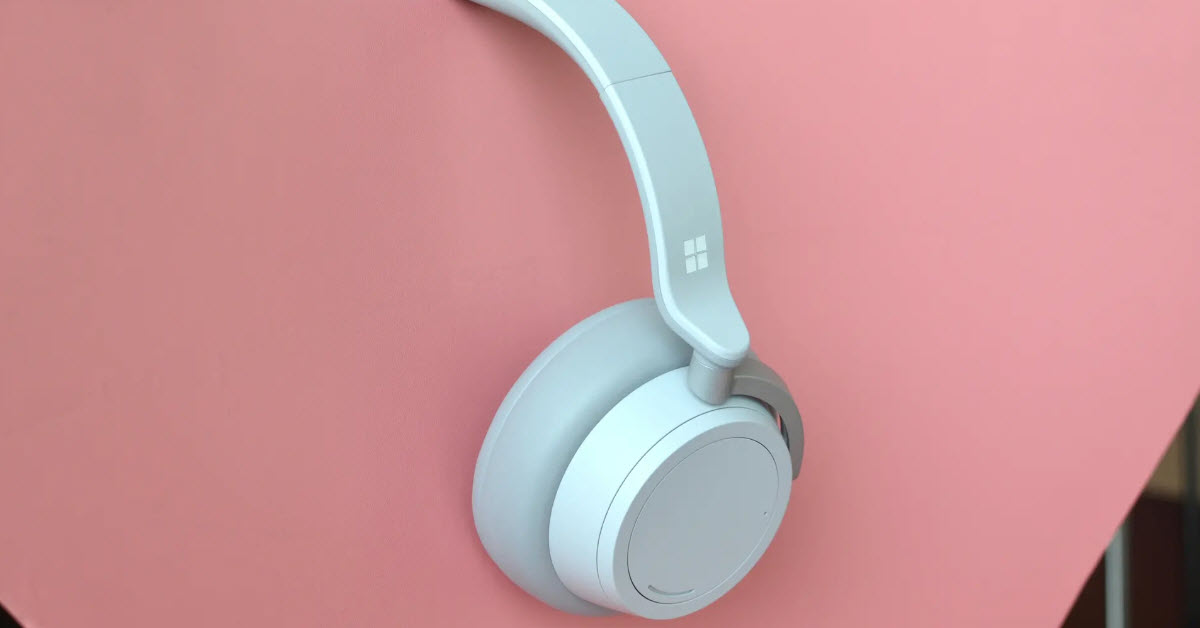 PLEASE NOTE: Add your own commentary here above the horizontal line, but do not make any changes below the line. (Of course, you should also delete this text before you publish this post.)

This article titled “Microsoft Surface Headphones review: close but no cigar” was written by Samuel Gibbs, for theguardian.com on Thursday 13th December 2018 06.00 UTC

Headphones seem like an odd choice for the Xbox, Office and Windows maker, but the are being produced by Microsoft’s burgeoning consumer electronics arm responsible for its line of Surface computers and accessories.

Platinum, no other option

Microsoft has aimed right for the top of the tree in terms of wireless, noise cancelling headphones. The fit and finish of the Surface Headphones is every bit as good as Bose.

The large, soft round ear cups encapsulate my ears with their oval openings, while the angle of the band and hinge points give plenty of flexibility, avoiding any obvious pressure points.

The headband is a squishy rubber material and does a good job of avoiding causing sore points on the top of your head during extended wearing periods.

At 290g the Surface Headphones are heavier than their two main rivals, the 240g Bose QC35 II and the 255g Sony MX1000M3. The added weight didn’t affect the long-listening comfort, but it was noticeable when walking out and about, as was the increased bulk compared with the Bose.

The outside design of the headphones is both distinctive and bland in equal measure. The platinum colour (the only colour available) is quite noticeable on your head, but the simple design looks rather understated. They’re not subtle, but neither are they ostentatious.

Each ear cup has a touch panel, on which you tap once to pause, twice to skip forward and thrice to skip back. Tap and hold to summon Google Assistant or Siri. They will also pause the music when you take them off.

Surrounding each touchpad is a rotating ring. The right ring controls volume, the left noise cancellation level. Both are smooth and satisfying to use, with short beeps when you hit the maximum or minimum settings.

The right ear cup also has a power button, which you short press to turn the headphones on or off or hold for five seconds to initiate Bluetooth pairing. There’s also a microphone mute button for calls. In the US that button can turn on or off Microsoft’s voice assistant Cortana, but it is not available in the UK on the Surface headphones.

Bluetooth connectivity was strong and stable, but the Surface Headphones only support the default SBC Bluetooth audio standard, not AAC or aptX which both offer higher quality and lower latency. It’s a strange omission for premium Bluetooth headphones, which as a result can suffer annoying lip sync issues with video, particularly YouTube.

The Surface Headphones have good but not great noise cancelling, not quite matching Bose or Sony. They will kill off droning noises, but they let through more of the sounds of the commute or the office, particularly voices, which became annoying while trying to concentrate.

I found the maximum noise cancelling was particularly prone to wind noise, while the maximum amplification generated spurious roars while in a train station or in a carriage. The headphones are noticeably better at blending outside noise with music than rivals. Disappointingly, though, there’s no setting to turn on ambient sounds when paused, which is a particularly useful feature when trying to hear public transport announcements.

No matter if you can hear them with ambient sound piped into your ears, talking to someone with your headphones on is incredibly rude, so you end up taking them off. In the end I left noise cancelling at one step from its maximum.

Sound quality was surprisingly good, even without advanced Bluetooth audio codecs. The headphones have a nice, warm, relatively rounded sound, with good bass reproduction where needed and crisp highs. The soundscape is quite wide too, which made listening over extended periods easy.

The Surface Headphones made a decent job of most genres of music, but were best with guitar or vocals, sometimes feeling a little less sharp with electronica.

Overall, as with noise cancelling, they are good, but not quite as sparkling as the Sony headphones, although some might prefer them to the sometimes clinical Bose sound signature.

The Surface Headphones lasted about 14 hours in my testing over Bluetooth with noise cancelling on, which sounds long but meant I had to charge them at least twice a week. With rivals lasting at least 20 hours, sometimes far longer, 14 hours isn’t that long. At least they will last through a flight, and they charge pretty fast via USB-C – a rarity still for headphones.

The Microsoft Surface Headphones are only available in platinum silver and cost £329.99.

The Surface Headphones are good, but not great, and don’t not quite matchup to rivals costing the same amount such as the Bose QC35 II or Sony MX1000M3.

They are comfortable, but heavier than the rivals. They sound good, but not quite as stellar as the competition, ditto for the noise cancelling and even the battery life.

The styling is unique and they stand out on your head, but the platinum grey colour is likely to be divisive. Equally the buttons, controls and particularly the rotating volume and noise cancelling dials work well.

But when you’re spending £330 you should be able to expect the best performance, comfort and sound. Buy the Surface Headphones if you want to be different or you love Microsoft, but if not your money is probably better spent elsewhere.

Cons: no Cortana support in the UK, battery life, sound and noise cancelling not quite as good as rivals, fairly big, no support for AAC/apt