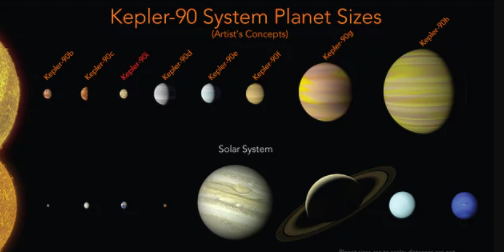 This article titled “Nasa find first alien solar system with as many worlds as our own” was written by Ian Sample Science editor, for The Guardian on Thursday 14th December 2017 19.14 UTC

Scientists on Nasa’s Kepler mission have spotted an eighth planet around a distant star, making it the first alien solar system known to host as many planets as our own.

The newfound world orbits a star named Kepler 90 which is larger and hotter than the sun and lies 2,500 light years from Earth in the constellation of Draco.

Known as Kepler 90i, the freshly-discovered world is smallest of the eight now known to circle the star, and while it is probably rocky, it is a third larger than Earth and searingly hot at more than 420C.

“This ties Kepler 90 with our own solar system for having the most known planets,” said Paul Hertz, director of astrophysics at Nasa’s headquarters in Washington DC.

Researchers on the Kepler planet-hunting telescope discovered Kepler 90i when they teamed up with artificial intelligence specialists at Google to analyse data collected by the space-based observatory.

The Kepler telescope hunts for alien worlds by detecting the shadows planets cast as they orbit their parent stars. When a planet passes in front of its star, the telescope detects a minuscule dimming in light, which for an Earth-sized planet circling a sun-like star, can mean a fall in luminosity of a mere 0.01%.

Kepler has observed 150,000 stars to date and already discovered more than 4,000 candidate planets, of which about 2,300 have been confirmed. Astronomers now suspect at least one planet orbits every star in the sky.

For all their success with Kepler, Nasa scientists knew that more planets lay hidden in the telescope’s observations, but the signals were so weak they were difficult to spot. This is where Google’s AI researchers came in. By training a neural network to learn what bona fide signals of distant planets looked like, Christopher Shallue, a Google researcher, helped Nasa to scour Kepler’s observations of 670 stars for planets that had previously been missed.

The search turned up two new planets around different stars, Kepler 90i, and another world named Kepler 80g, the sixth planet now known to orbit its star. The scientists now plan to search Kepler’s data on all 150,000 stars for other missed planets. A research paper on the findings will be published by the Astronomical Journal.

Suzanne Aigrain, an astrophysicist at Oxford University who was not involved with the research, said: “What is perhaps most exciting is that they are able to find planets that were previously missed, suggesting there are more yet to be found using this approach.”

Earlier this year, Kepler scientists announced the discovery of 219 more candidate planets, of which 10 appeared to be about the same size and temperature as Earth.