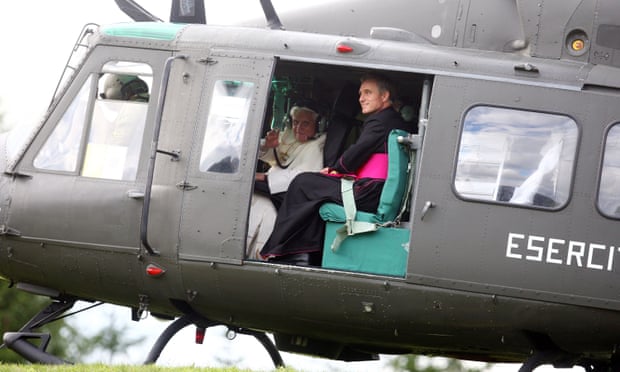 This article titled “Private lives of the popes: from flying helicopters to dancing the tango” was written by Stephen Moss, for The Guardian on Monday 15th February 2016 16.47 UTC

‘More smoke than fire,” says the Vatican of Panorama’s programme about The Secret Letters of Pope John Paul II. For once, it’s hard not to agree with the cardinals. For more than three decades, Pope John Paul – the Polish pontiff who oversaw the Catholic world for 27 years and is being fast-tracked to sainthood – carried on an intense correspondence with Polish-born American philosopher Anna-Teresa Tymieniecka. They met frequently, collaborated on books, wrote each other what were to all intents and purposes love letters, but it seems they never … how can I put this … actually did it. John Paul’s vow of celibacy remained intact – as far as we know, anyway.

If that is the case, it would seem to strengthen the case for sainthood, rather than weaken it. Clearly, they loved each other; they had plenty of opportunity – numerous meetings à deux, not least while Tymieniecka was translating John Paul’s book The Acting Person (her translation is controversial and the real story may be that she screwed up the book). But we are led to believe that nothing ever happened. Certainly, Panorama could find no evidence. It’s a miracle.

The personal lives of modern popes are largely dull – hence the interest in these letters. If a cardinal had a love child, the rest of the conclave would almost certainly know about it and his chances of election would be minimal. More fire than smoke. The Vatican may be secretive, but it’s not stupid, and papal candidates are expected not to have too much personal baggage.

Pope Francis, the first Latin-American Pope, is often presented as a football fan – he supports the Buenos Aires team San Lorenzo – to play up his man-of-the-people credentials. More controversially, he was said, in his earlier days, to like to dance the tango, although luckily for him no footage of him engaged in that debauched activity has so far surfaced. His retired predecessor, Pope Benedict, is fond of cats, loves classical music and plays the piano (especially Mozart and Beethoven). Although he can’t drive a car, he does (for reasons never properly explained) have a helicopter licence, and was occasionally known to command the papal chopper. As for his stylish red sneakers – Benedict was something of a fashion icon – the Vatican always insisted the Pope did not wear Prada.

This is all thin pickings compared with the popes of the past. Renaissance-era Pope Alexander VI, one of the Borgias, fathered several children by his mistresses, but was nonetheless feted as a great reformer (Machiavelli was a big fan) and patron of the arts. His predecessor, Innocent VIII, also had two illegitimate children (admittedly before becoming pope) whom he then shamelessly promoted once installed in the Vatican. As for Pope John XII … that’s another, X-certificate millennium. A Panorama exposé circa 950 – now that really would have been worth watching.