Saturn in full view and at full tilt 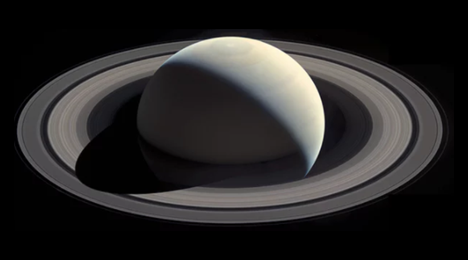 This article titled “Saturn in full view and at full tilt” was written by Alan Pickup, for The Guardian on Sunday 11th June 2017 20.30 UTC

Saturn’s northern hemisphere is now tilting at its maximum angle to the Sun, 26.75°, as the beautiful ringed planet enjoys its own summer solstice. It is also nearing opposition on the 15th when it stands opposite the Sun in Earth’s sky so that it rises at sunset, stands highest in the middle of the night and sets at sunrise.

Saturn’s rings are best seen when the planet comes to opposition around the times of Earth’s solstices, as it does every 15 years or so. This arises because the rings lie directly above Saturn’s equator and its polar axis is aligned to within 6° of that of the Earth, much closer than for any other planet. We could say that we share the same north pole star, Polaris.

Our impressive image, constructed by amateur enthusiast Ian Regan from a sequence of frames by the Cassini probe, shows Saturn last October when its solar tilt was slightly smaller at 26.57°.

For Britain, sadly, Saturn climbs only some 15° high in the S at this opposition and telescopic views will be less than pristine. Nonetheless, it is bright at magnitude 0.0 in our lower S sky after Jupiter, higher and seven times brighter in the SW at nightfall, sinks into the W.

Creeping westwards in S Ophiuchus and to the left of the red star Antares in Scorpius, Saturn is 1,353 million km away at opposition. Telescopically, its rotation-flattened disc appears 18 arcsec wide across its equator and 16 arcsec from pole-to-pole, while the rings span 41 by 19 arcsec, being tilted enough for their outer parts to be visible around their full circumference.

Composed mainly of water ice chunks between the sizes of a sugar cube and a double-decker bus, the brighter rings are thought to be less, perhaps much less, than 1km thick yet they stretch out to 137,000km from the planet’s centre – Saturn itself is 120,000km wide.

The outer bright ring, A, is separated from its brighter neighbour, B, by the 4,700km Cassini division. The fainter ring, C, lies inside B, and then the hard-to-see ring D. All of them consist of countless ringlets, shepherded by tiny moonlets embedded within them and by the tidal forces of some of Saturn’s many other satellites. Further dim rings and arcs of dust and ice extend far outside ring A.

As it nears the end of its mission with a fiery plunge into Saturn on 15 September, Cassini is now passing between ring D and the cloud tops, finding the region to be surprisingly free of material.

•This article was amended on 12 June 2017 to correct a typographical error in the final paragraph.