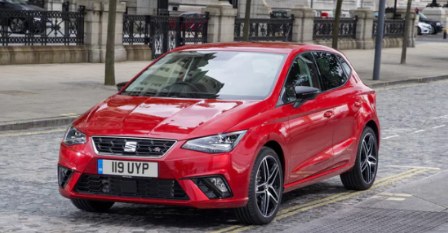 This article titled “Seat Ibiza review: ‘Plenty of attacking flair’” was written by Martin Love, for The Observer on Sunday 14th January 2018 06.00 UTC

Even if you aren’t a football fan, you’ve probably heard that FC Barcelona have lifted the beautiful game to dizzying new heights with their focus on speed, accuracy and ball skills. Now a similar transformation is sweeping over the city’s car industry. For decades, Seat was the go-to guy for steady yet uninspiring cars. If Barça were winning championships, Seat was battling to stay out of the relegation zone – but new signings, such as the Ateca and the Arona, are giving Seat plenty of attacking flair.

The key battle Seat faces is in the small-car sector. In sales terms this is where the big numbers are and it’s a nice parallel that Barça’s most lethal weapon is the diminutive Leo Messi, while Seat’s giant killer is all set to be the titchy Ibiza. Already Spain’s best-selling model, the Ibiza was launched in 1984. It was designed by the legendary Giorgetto Giugiaro, while the engine was developed with the collaboration of Porsche, and Karmann helped build the bodywork. In terms of car pedigrees, that’s Best in Show.

Since then almost 5.5m have been sold, with a remarkable 3m of them still on the road. The current model is being built in the super-modern Martorell factory just outside the Catalan capital, and each day 700 new Ibizas roll off its production line. Most are exported to 80 different countries around the world, and more than half its buyers are women. Seat is clearly doing something right as far as international women are concerned.

Seat has always liked to name its cars after Spanish cities, so far they’re up to 13, including Toledo, Alhambra, Marbella and Leon. People who purchase the Ibiza tend to be about a decade younger than those buying any of the other cars in the VW group, it’s appropriate therefore that this upbeat model is named after the party island. But before the chilling begins there are a few basics you need to get your head around. The most important is that the Ibiza has been chosen by VW to debut its latest production platform. It’s called MQB A0 and will eventually underpin the VW Polo, Audi A1 and Skoda Fabia, plus a range of small SUVs. This hi-tech platform means the new five-door Ibiza is blessed with lots of safety, connectivity and luxury extras that never normally get a showing at this level. There’s pedestrian detection with auto braking, adaptive cruise control, wireless charging for mobiles, LED lights and Apple CarPlay and Android Auto. The overall impression is of a small car that handles like a big car. Several times during the week I spent with the car, I pulled over to check the spec sheet and the price. At times it seemed too good to be true. There are endless choices available, even for the dashboard clock – you can scroll through four alternative displays.

Design follows the template Seat has set across its line-up for sharp edges, pronounced creases and a slightly snarky face. Despite its modest foot print, it feels unexpectedly roomy inside. There’s space for five (chunky) adults and their luggage, too. The finish is impressive, with rich suedes, soft-touch plastics and plenty of chrome.Seat is no longer a boring budget alternative.

Engine wise there are three versions of VW’s mile-busting 1-litre three-cylinder on offer with power choices of 74, 94 and 114bhp. There’s also a 148bhp 1.5-litre petrol unit due out soon. The top seller will be the 94bhp option. It’s remarkably efficient and offers a diligent, pleasant drive. A decision has been taken not to offer a diesel alternative, which will suit urban drivers on low mileages, but these smaller engines can struggle on longer journeys. It only comes with a three-year warranty, which is mean considering longer warranties are offered by the likes of Kia and Hyundai.

Good-looking, affordable, loaded with tech and with a proven track record… This is a little Seat which deserves a big standing ovation.