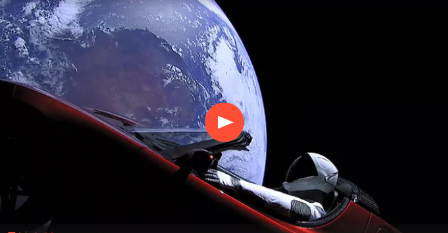 This article titled “SpaceX rocket set to overshoot Mars and hurtle towards asteroid belt” was written by Richard Luscombe in Miami, for The Guardian on Wednesday 7th February 2018 22.34 UTC

Elon Musk’s cherry red Tesla sports car and its dummy test pilot Starman were on a new course hurtling towards the asteroid belt on Wednesday after overshooting their planned trajectory.

Just hours after Tuesday’s spectacular launch from Florida of Falcon Heavy, the world’s most powerful space rocket, the billionaire founder of the private spaceflight company SpaceX admitted Starman had been a little heavy on the gas and would travel well beyond the intended target of Mars.

“Third burn successful. Exceeded Mars orbit and kept going to the Asteroid Belt,” Musk said in a tweet that seemed to confirm the final destination of the mission had changed.

Originally, the $100,000 electric Tesla Roadster, chosen by Musk as a whimsical experimental payload for the Falcon Heavy’s maiden flight, had been intended to reach a heliocentric orbit roughly the same distance from the sun as Mars, and orbit for a billion years.

On its new trajectory, the world’s first car-turned-spacecraft will take a months-long cruise through deep space before taking its chances in the circumstellar asteroid belt between Mars and Jupiter, where the risk of a catastrophic collision is greater.

Some experts fear a bombardment of space radiation might even cause the Tesla to disintegrate before it gets there. “All of the organics will be subjected to degradation by the various types of radiation that you will run into there,” William Carroll, professor of chemistry at Indiana University, told livescience.com. “As the bonds break, the car can literally fall apart.”

Meanwhile, mission managers at SpaceX, the upstart California-based company that hopes to use the demonstration flight to win contracts from Nasa, the US military and private space enterprise, have not confirmed whether the course-change was by accident or design.

But at a press conference late on Tuesday, Musk said longer-range missions were always planned to be within the capabilities of the Falcon Heavy rocket, a 27-engine leviathan second only to Nasa’s long retired Apollo-era Saturn V in terms of sheer lifting power.

“It can do anything you want … it can launch things direct to Pluto or beyond, no stop needed, don’t even need gravity assist or anything,” he said. “Two or three Falcon Heavies would equal the payload of a Saturn V.”

Musk also confirmed the loss after launch of the reusable central core booster, one of three of SpaceX’s smaller Falcon 9 rockets that were essentially strapped together to form the Falcon Heavy. The two side boosters returned safely to landing pads at the Kennedy Space Center, but the third, which had been intended to land on a barge in the Atlantic, crashed into the ocean at 300mph, “showering the deck with shrapnel”, according to Musk.

“We’re looking at the issue. The centre core obviously didn’t land on the drone ship,” he told reporters. “We have the video. It sounds like some pretty fun footage if the cameras didn’t get blown up as well.”

South African-born Musk, the billionaire former CEO of the online money transfer company PayPal, said he had invested more than half a billion dollars to get Falcon Heavy off the ground and hoped the success of its first flight would lead to more competition with private spaceflight rivals, including Blue Origin, owned by the Amazon tycoon Jeff Bezos.

“We want a new space race. Space races are exciting,” he said. “It’s going to encourage other companies and countries to say, ‘Hey, if SpaceX, which is a commercial company, can do this, and nobody paid for Falcon Heavy, it was paid [for] with internal funds, then they could do it too.’”